Specialists from the Academic Laboratory of Industrial Robotics of Tomsk Polytechnic University are developing a multi-agent robotic system for flying a swarm of intelligent drones. Now they are tasked to ‘teach’ a swarm of 10 drones to fly without crashing into each other, avoid stationary or mobile obstacles and safely land on the point specified by the operator with high accuracy. At the same time, high accuracy of drone navigation is ensured by the simultaneous use of a global navigation system and an ultrasonic system. 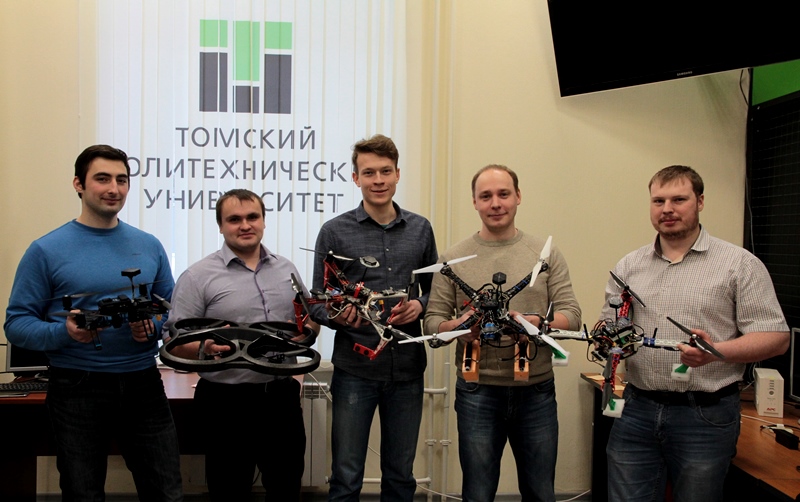 The research is carried out in the framework of a project supported by the Foundation for Promotion of Innovation. The project customer is LLC KOMPSTAR. A dedicated R&D team brought together experts from different areas: programming, acoustic location, robot vision, telecommunication, and automated control systems.

One of the developers, an engineer from the Academic Laboratory of Industrial Robotics Maksim Murin says: ‘There is no need to surprise someone with flying drones. However, it is rather difficult to find universal and affordable solutions which allow launching more than three aircrafts in the sky, so that they consistently carry out the given tasks, being close to each other with minimum human involvement. There are solutions for about six drones, as a rule, they perform very simple tasks, i.e. getting from point A to point B along a given flight path. In our case, we need to ensure that they may safely fly in the swarm, may independently find the direction, decide if it is necessary to deviate from the course, and land close to each other.’

GPS, which is currently used to control unmanned aerial vehicles, admits position deviation up to 2.5 m. To avoid the crash of drones, it should be 5 m. between them. TPU researchers will overcome the constraint using ultrasonic sensors, technical vision, and landing.

‘The drone is refitted with an ultrasonic location system which allows it to detect obstacles within the radius of 7 m in five directions. We added to the system an original function: the vehicle can identify the swarm member, which allows them to synchronize their movements and relocate their current coordinates.

Technical vision consisted of two video cameras positioned in the direction of vehicle motion makes it possible to detect obstacles at greater distances. The landing system which also uses a camera directed downwards helps to ensure landing with the accuracy of one meter. Although laboratory tests showed that drones can land with a greater accuracy on a sheet of A4 paper,’ notes Maksim Murin.

An onboard computer processes real-time information received from all sensor systems. According to the developers, the weight of the whole vehicle will not exceed two kg.

Head of the Academic Laboratory of Industrial Robotics Nikolay Krinitsyn adds: ‘Thus, the operator can simultaneously program a route for a swarm of drones. We have already developed the appropriate software. Further, the vehicles should orient themselves on the terrain and take decisions on maneuvering. The main task is all the drones reach their place of destination without damage.

The scientists note that the developed complex of high-precision coordination of UAV swarm navigation will contribute to the reduction of total cost of drones when carrying out tasks with distributed load, more information about surrounding space from different vehicles, and the enhancement of system survival.

The development will be useful for rescue operations, monitoring of construction sites, power facilities, in oil & gas sector, agriculture, remote sensing of the Earth and the organization of joint access to airspace, as well as for military purposes.