Physicists from Tomsk Polytechnic University suggested a new method to recycle spent nuclear fuel (SNF), which, first, provides for the reduction of power expenses and, second, facilitates the extraction of precious and noble metals, e.g. palladium, rhodium and ruthenium, from wastes. 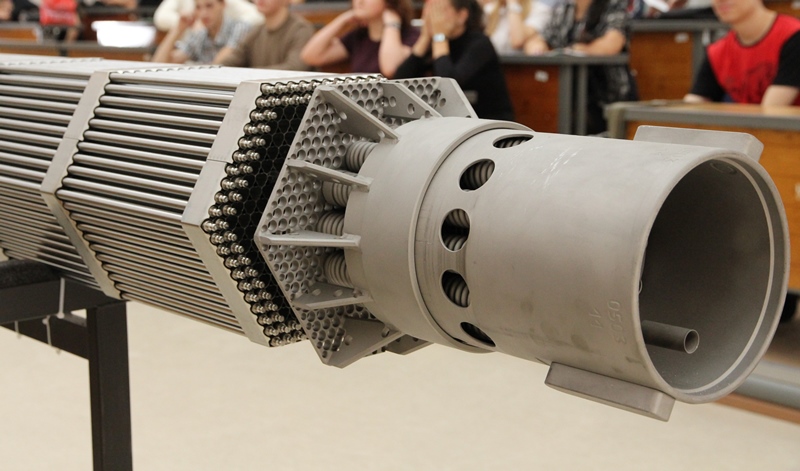 The room shortage for SNF storage is a pressing issue for all countries developing nuclear energy. According to some researchers, at present in Russia there are about 16,000 tons of SNF on the sites of NPPs and in the storage facilities of radiochemical plants. The annual increase of stored fuel reaches 850 tons.

There are two options for SNF handling: storage and recycling. The first method is ensured through either dry storage (in ventilated rooms) or wet storage (under water) that is much cheaper. However, recycling, although involving considerable funding and energy expenses, is more modern and environmentally friendly.

Ivan Novoselov, an assistant of the Department of Technical Physics told about a modernized method for SNF recycling. A standard process involves SNF fragmentation, dissolution in nitric acid, extraction of uranium, plutonium and the production of Mixed-Oxide fuel (MOX-fuel) on their basis for NPPs. The SNF recycling waste left without uranium and plutonium are high-activity water-salt solutions containing a range of radioactive fission products of the uranium-235 isotope (platinum group metals and rare earth elements) and other metals. The existing technology includes evaporation of these wastes, addition of chemical reagents (silicates, phosphates, borates and others) and delivery to vitrification followed by burial in the briquette form. However, this method has a number of drawbacks.

‘Unlike radioactive wastes, SNF RW have a certain value: their components can be used in the future. Briquettes obtained after vitrification take less volume and do not contain uranium and plutonium, but contain isotopes of very precious metals of the platinum group, i.e. palladium, rhodium and ruthenium which are fission products. The problem is that it is impossible to extract them out of briquettes,’ says Mr. Novoselov.

Ass. Prof. Alexander Karengin from the Department of Technical Physics adds that TPU scientists suggest using low-temperature plasma to immobilize SNF recycling wastes. TPU technology makes it possible both to integrate into the existing recycling process and to reduce its cost.

‘SNF recycling technology, when applied at radiochemical plants, is based on PUREX-process in which uranium and plutonium are extracted from water-salt solutions with tributyl phosphate (TBP) using various organic diluents (kerosene, purified hydrocarbons and others) when exposed to radioactive irradiation they gradually lose their effectiveness and convert into combustible recycling products (SNF CRP). We designed a joint plasmonic immobilization of combustible and non-combustible SNF recycling products in air plasma in melts metal chlorides (sodium and potassium) resistant to radiation. As a result, we obtain a combustible composition, which is processed in air plasma at the temperature of not less than 1,200 ? C. At the output we obtain a peculiar melt which is collected in special containers, solidified and sent for storage.

After the required time it will be possible to extract metals of platinum group from substance via chemical methods. For comparison: from 1 ton of SNF we can obtain up to 2 kg of ruthenium, up to 1.5 kg of palladium and up to 0.5 kg of rhodium,’

TPU technology features the cost reduction due to less number of operations, smaller volume of capacitive equipment, the reduction of expenses for chemical reagents and power. At TPU the research has been conducted using a plasmonic complex since 2013. The project is partially financed by the Nauka State Task and the Federal Target Program.

The technology was reported at the international conference Isotopes: Technologies, Materials and Applications held at Tomsk Polytechnic University.