The Russian Foundation for Basic Research has recently supported a project of Tomsk Polytechnic University on the design of a geoinformation system to forecast wildfires caused by humans in the Baikal Lake basin. For three years TPU scientists together with their colleagues from Saint Petersburg, Ulan-Ude and Gorno-Altaysk will try to solve the most complicated task, i.e. to develop methods for assessing and forecasting anthropogenic loads on forests in the lake area, as well as to design a prototype geoinformation system for forecasting fires which might be used, for example, by airborne protection and forestry departments. 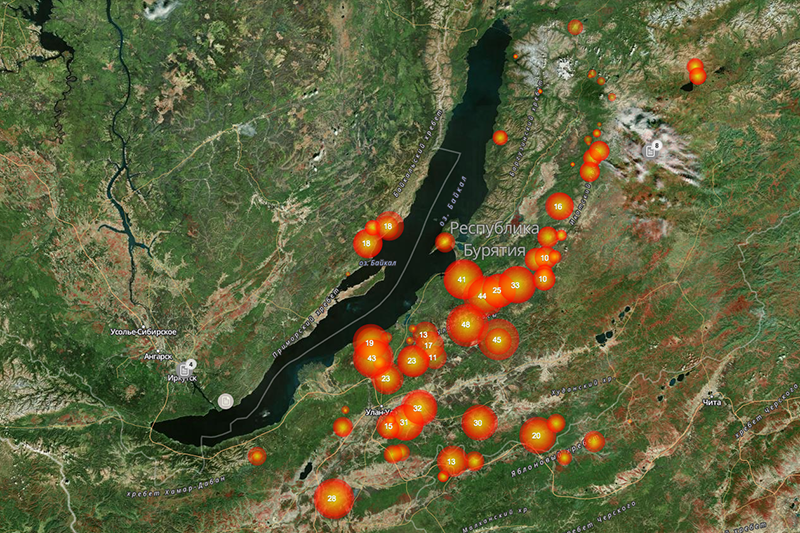 Photo: The fire map around Lake Baikal. The image is from space. fires.kosmosnimki.ru.

According to foreign studies published in Biological Conservation and dedicated to the human impact on forest degradation, over past 20 years forest lands around Baikal has decreased by 5 %. At the same time, annually forests nearby the lake are damaged by wildfires. The Buryatia Republic Forest Agency calls the human factor as the main cause of fires in the region. Fires occur on picnic spots, at hunting, from thrown burning matches, burning cigarettes, because of glass fragments, in sunny weather focusing sun’s rays like incendiary lenses.

‘The Baikal area is significant both for Russia and the entire world, so it is important to preserve this heritage.

Our project is aimed at the development of an anthropogenic fire monitoring system. This is a complicated problem that has not been successfully solved anywhere in the world yet. Since it is very difficult to predict the human factor, it is necessary to take into account a great number of parameters.

Our team has already accumulated a significant expertise in forecasting fires, including the ones occurring due to thunderstorms. Now we want to apply our knowledge in the basin of the Baikal Lake,’ says the project leader Dr Nikolai Baranovskiy, Ass. Prof. at the Department of Theoretical and Industrial Thermal Engineering.

Scientists will choose a control forestry area in the Baikal region. ‘We need to collect data on the composition of forests and anthropogenic load: fire statistics, the location of roads and various objects,’ explains the scientist.

To collect data and measure characteristics of the environment the scientists will organize an expedition to the forestry and use images from space.

‘The outcome of the project will be both mathematical theories and recommendation for forest protection and a geoinformation system prototype. It should be an online map that will identify areas where anthropogenic loads are more likely to cause fire. This information allows us to increase monitoring in certain forest areas and to react more quickly in case of emergency,’ believes the researcher.