Scientists from Tomsk Polytechnic University have revealed that scaffolds made out of a piezoelectric polymer with the addition of mineral nanoparticles can be successfully used to repair bone tissue, TASS Russian News Agency reported. Such composites are able to survive the environment of the body and stimulate the growth of bone tissue, thus accelerating the recovery by means of converting the compression-extension energy into electric pulses due to piezoelectric effect. 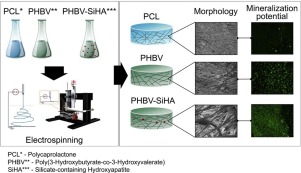 ‘In our study we compared properties of three materials used for the development of biodegradable scaffolds. In addition to classical polycaprolactone we took a piezoelectric polymer and a piezopolymer with the addition of bioactive nanoparticles,’ says the Head of TPU Technology Center Roman Surmenev.

‘Electric pulses occurring by mechanical deformation or pressure on the piezoelectric polymer activate the cells of living tissue, encouraging them to grow and divide. Therefore, polymers with this property are very promising for regenerative medicine. Our experiment shown that the best option for bone tissue repair is the third option, i.e. a hybrid biocomposite,’ tells the researcher.

How polymer materials are used for tissue repair

Polymer scaffolds serve as ‘frames’ for living cells that form new bone tissue. These frames are made of biodegradable materials: over time, when a bone is formed the scaffold material breaks down into simple substances and is removed from the body. One of the most frequently used synthetic polymers is polycaprolactone (PCL), which has suitable mechanical and biodegradable properties for the development of functional hybrid scaffolds. However, scientists continue seeking for the most functional materials for regenerative medicine.

For their study TPU scientists chose a polymer from the group of polyoxyalkonoates which has piezoelectric properties like natural bone. In addition, the scientists extended the capabilities of the material by adding hydroxyapatite nanoparticles into the polymer. Hydroxyapatite is a synthetic substance which is similar to mineral component of the skeleton is used in materials for orthopedics and dentistry.

What has been done

In the course of the experiment the scientists placed stem cells on the polymers. These cells in the body differentiate almost in any tissue of any organ, therefore, their behavior show the ability of polymers to be implanted. The study revealed there were approximately 1.5 times more living cells on the surface of the biocomposite with nanoparticles than on the other samples. This was achieved due to the added silicon-hydroxyapatite which increases the surface area of polymer scaffolds, enriches them with calcium, phosphorus and silicon and improves their wettability.

‘In addition to the quantitative assessment, we also evaluated the viability of cells on polymers. In 24 hours after the beginning of the experiment, on each of the samples the cell survival was over 80 % and on the polymer with nanoparticles it exceeded 95%. This proves that the piezoelectric composite with inorganic nanoparticles is biocompatible and promotes cell growth as well,’ explains Roman Surmenev.