Researchers from Tomsk Polytechnic University and Queen Mary’s University of London have developed smart capsules which make it possible to deliver water-soluble compounds to a certain part of the body. Two-micron capsules have watertight shells inside of which nanoscale magnets can be embedded, allowing a drug to be delivered to the targeted part of the body. Having reached it, capsules gradually dissolve, releasing the drug outward. According to the researchers, such measures will assist in the delivery of drugs which consists of proteins and other water-soluble substances used to treat a wide range of diseases including cancer and infectious diseases. 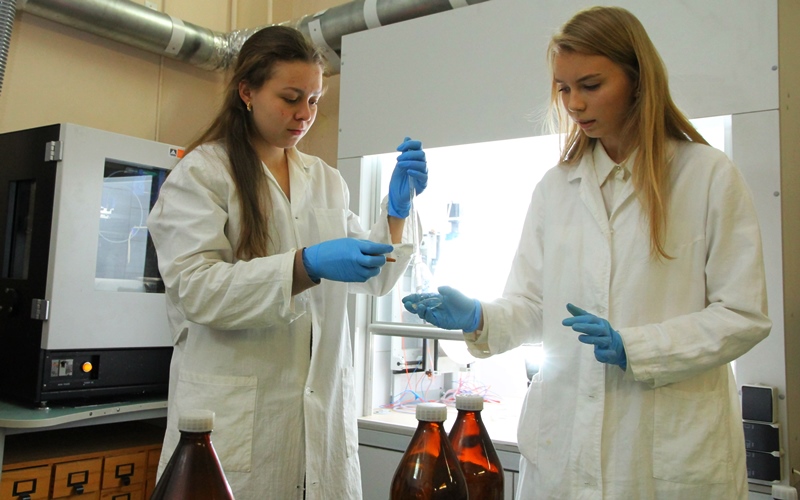 Photo: Valeriya Kudryavtseva to the right

The researchers point out they developed an unparalleled technology. The study outcomes were published in Colloids and Surfaces B: Biointerfaces (IF 3.887; Q1).

‘Some drugs contain components that dissolve rapidly in liquid media. For example, proteins immediately begin to dissolve in water. In recent decades various drug delivery methods have been developed, including polymeric micelles, multi-layer micro-capsules and liposomes. However, when using these technologies fluids leak into the ‘package’ of our drug. As a result, when it comes into contact with aqueous media in the body, its water-soluble components begin to dissolve and the treatment is not efficient. We were tasked to improve the retention of the loaded cargo inside capsules and prevent the ingress of fluids into them,’ says the main author of the article Valeriya Kudryavtseva, a graduate student of the Institute of Physics and Technology.

To address this problem, researchers from the Laboratory of New Medications, RASA Center in Tomsk, headed by Gleb Sukhorukov, Queen Mary’s University of London, together with the colleagues from the Laboratory for Hybrid Biomaterials, Tomsk Polytechnic University, headed by Ass.Prof. Sergei Tverdokhlebov, the Department of Experimental Physics have proposed for the first time to create a combined ‘package’ for drugs, consisting of calcium carbonate coated with a thin nano-layer of polylactic acid: a biodegradable polymer which TPU scientists apply in the creation of biodegradable implants.

‘Earlier there were studies with these materials carried out separately. Our colleagues tried to load drugs either into capsules of polylactic acid or into particles of calcium carbonate. Nobody combined the properties of both materials. We decided to experiment and find out what happens as a result,’ clarifies Valeriya Kudryavtseva. She says it was a laboratory study. The scientists tried to dissolve the improved capsules which used a combination of these materials in various fluids identical to those found in the human body. The capsules were successfully tested.

Photo: SEM images (obtained from the BSE detector) of PLA-coated micro-particles with various mass ratios of CaCO3 particles relative to PLA: (a) 0, (b) 0.2

‘Thanks to polylactic coating, calcium carbonate did not dissolve under the conditions under which it normally dissolves.

Since polylactic acid is hydrophobic, it does not allow fluids to penetrate inside capsules and to release the drug. Meantime, having reached the target destination it starts gradually dissolving, then calcium carbonate dissolves too and thus the drug is released and begin to effect,’

She notes that in contrast to existing technologies in this area the developed method to fabricate microcapsules for target delivery of water- soluble drugs is by far the most effective and affordable. Further the scientists are going to continue improving the new technology. For example, they will test smart shells for water-soluble drugs inside the living body.