A research team from the Department of General Physics of Tomsk Polytechnic University is designing protective titanium nitride-based coatings for shells of fuel elements (fuel rods) used in nuclear reactors. Such shells can significantly reduce hydrogenation of containers where nuclear fuel is placed, extend their service life and protect reactors from explosion in case of potential accidents. 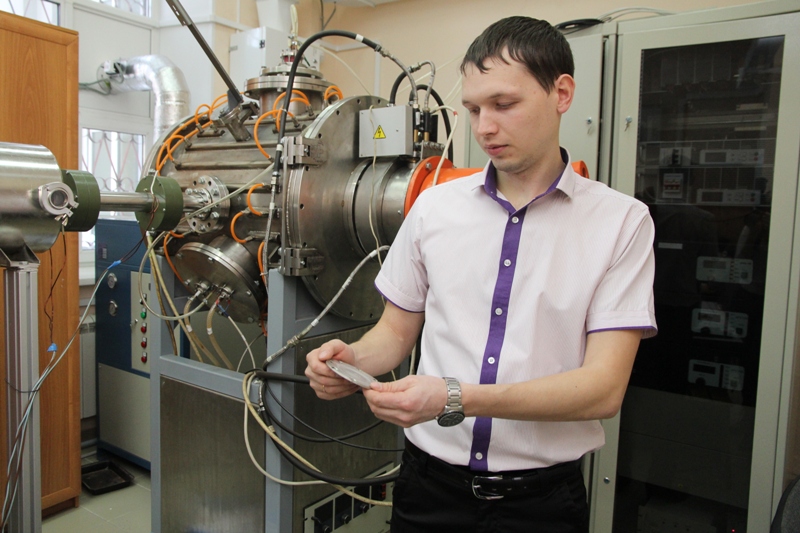 Photo: Egor Kashkarov, a PhD. student at the Department of General Physics

“In order to form fuel rods within any reactor nuclear fuel is laid in special “tubes” out of zirconium alloys. A nuclear reaction takes place in the fuel rods. As a result of radiolysis of a reactor coolant – water, and due to interaction of the coolant and zirconium under high temperatures hydrogen is released. In such fuel rods shells hydrogen is able to accumulate causing degradation of their mechanical properties and destruction”, clarifies one of the research team members, an assistant at the Department of General Physics Egor Kashkarov.

According to the young scientist the higher the temperature in the reactor is, the more hydrogen is released which is caused by the interaction of zirconium and water. For example, the same happened at the Fukusima-1 station in Japan: due to flooding of pumping equipment the active zone of the reactor warmed up to more than 1,200 degrees, a steam-zirconium reaction proceeded swiftly and a large amount of hydrogen was released. The explosion of accumulated hydrogen was one of the causes of the biggest radiation accidents in the world.

The research team from the TPU Department of General Physics is designing protective titanium nitride-based coatings that will serve a barrier protecting zirconium fuel rods from water and hydrogen accumulation.

“During tests titanium nitride has proved to be effective: it has high hardness, wear resistance, heat resistance and inertia. We also found that it protects the material from hydrogen penetration, what is critical for nuclear energy. 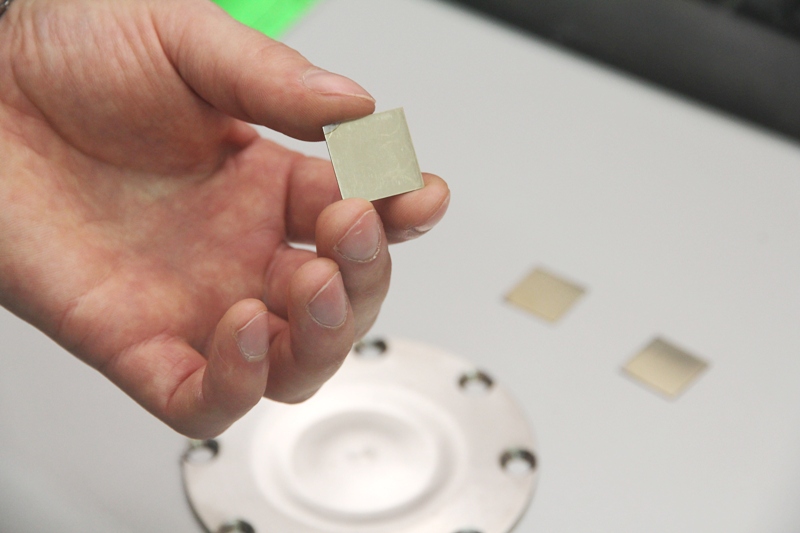 Photo: A sample of the titanium nitride-based coating

The coatings are applied to zirconium substrate through two technologies: magnetron sputtering and vacuum arc deposition. Both processes are implemented using the facility designed at the university. The result is a thin film coating which is not more than two microns thick.

“One of the applications of designed titanium nitride coatings is the next generation reactors and thermal nuclear reactors where hydrogen impermeable coating is a key issue. In the next generation reactors, temperature is supposed to increase up to 400-450 degrees to improve fuel burn-up efficiency. Consequently, hydrogenation of fuel rods will be happen much faster. Our coatings are able to avoid this”, says the researcher.